St. Valentine’s Is Not My Favorite Day

If you’re one of the 157,000 women (give or take a few thousand) who received roses today, stop reading.

Ditto for the chocolate and jewelry.

I mean it. Close the window on your browser and find something else to do.  This post is for the rest of us.

Are they gone? Good. Here’s a graphic, just to capture the mood. 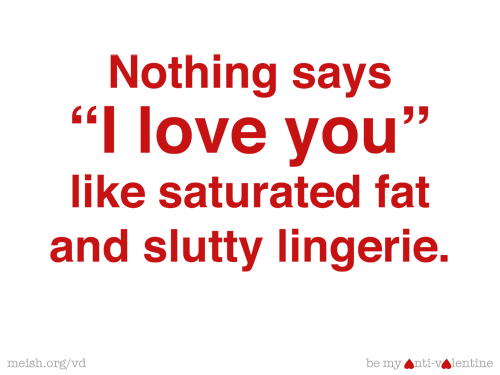 Blame it on the fairy tales. You know, the ones that taught us that Prince Charming would come along and make us happy?

Poor guy. No one ever thought about what made him happy. If he’s anything like my prince, happiness definitely doesn’t come wrapped in a heart-shaped box of chocolate. Or any other box, for that matter.

Which can be a problem. You see, I’m a middle child — the one couldn’t be the first at anything and didn’t get the unqualified love received by the baby of the family.

Middle children measure. We weigh. We worry about getting our fair share. In everything, from a glass of juice to presents under the Christmas tree. Of course, this really translates to deep-seated anxiety that someone else might be loved more than we are.

Sad, but true. Add in those damned fairy tales, and I was doomed to buy into the idea that some man I hadn’t met yet was responsible for making me happy.

And I believed it. Right up until I hit twenty-five with no prince in sight.

So I’m a slow learner; I get there eventually.

It was then, way back in 1986, that I suddenly thought, “What if he doesn’t come? This prince, this man who’s going to make my life wonderful? Am I supposed to just wait?”

That seemed kind of — okay, outright — stupid, so I got my act together and decided to make a life that included all the things that I wanted.

And, you know what? I had a pretty good start before I screwed up and fell for a man who was such a loser he doesn’t even warrant an explanation here.

Still, I picked myself up, dusted myself off, and went back to work shaping my destiny.

Then, I met D. — the one who is not a fan of Valentine’s Day — and, over the (many) years we’ve been together, we’ve worked out a compromise. Sort of. He generally gives in and gets me a card. I get him one, and we agree not to say anything more about it.

Until today. When there was no card. For me, I mean.

I felt hurt. He felt — I don’t know — maybe persecuted? Suffice to say, neither of us felt happy.

And, gosh, gee whiz, isn’t that what a romantic holiday is all about? Making each other miserable?

Hmm … I think things have gotten a little bit skewed (or screwed, depending how you look at it). Who made him responsible for me being happy?

Um, that would be me. And why would I do that?

Well, he does. In many ways. From spending hours chipping the ice off the driveway to taking out the compost without being asked. Who says he has to succumb to someone else’s expectations of how to behave on Valentine’s Day?

Um, that would be me. Again. And that’s not fair. So, I want to be treated like a princess on Valentine’s Day. How does that outweigh his desire to ignore the holiday?

Besides, do I really want roses? No, not really. The ones from the florist never smell as good as the ones I manage to coax from our shady yard. Chocolate? No, I’m on my annual mid-winter diet. Diamonds? Uh, not a big fan of a rock whose price is artificially inflated and controlled by one company. (Can you say monopoly?)

What I want is to be reminded that D loves me.

He does. I know that. That’s going to have to be good enough.

Many years ago, at my high school, they sold flowers on the holidays. For four years, I longed for someone to buy me one of those artificially colored carnations. For Valentine’s Day, Sweetest Day — hell, I would have settled for one of the green ones on St. Patrick’s Day.

No one ever did.

Finally, on Valentine’s Day, when I was a senior, it dawned on me that no one ever would. I thought, “Damn it. I work. I have money. I don’t need someone else to buy my flowers. If I want one, I’ll buy it myself.”

And I bought one.

One of the more popular guys in our class asked me, “Who bought your flower, Kim?” (That was before I became Kym). So, I told him.

You know what? He smiled and seemed kind of impressed.

Smart girl, that seventeen-year-old me. She could teach the fifty-year-old me a thing or two.

Next year, if I want something for Valentine’s Day, I’m buying it myself.

But I don’t need hearts and flowers for my happy ever after.

I’ll close with this because sometimes all you really need is a good cup of tea.

Or a nice glass of wine. Whatever works for you. Cheers.

"Taking care not to take love too seriously." Writer of smart, fresh, contemporary romance and women's fiction. Blogging about writing, reading, and more recently, dealing with the ins and outs of breast cancer.
View all posts by kymlucas →
This entry was posted in Uncategorized and tagged Anti-Valentine's Day, love, romance, Valentine's Day. Bookmark the permalink.

1 Response to St. Valentine’s Is Not My Favorite Day