A Rave About Writing

Pantser or plotter? Ask a writer this question, and she’ll have an immediate response.

“Oh, I’m a pantser,” she’ll say. “Can’t plot ahead to save my life.” Or “Definitely a plotter. I need to know where I’m going when I write.”

Ask a non-writer, and they’ll probably wander off muttering under their breath about people who ask rude questions.

J.K. Rowling is a plotter. It’s said she outlined all of the Harry Potter novels before beginning the series. Several blogs including slashfilm.com have photos showing just how detailed Rowling’s charts could be (http://tinyurl.com/2eok9ox).

The one below is from Order of the Phoenix.

Stephen King and Nora Roberts are well-known (at least in writing circles) for writing “by the seat of their pants.” Brenda Novak is a pantser too. And I’ve heard several mystery writers say they can’t plot ahead because if they knew who the murderer was, they’d give it away.

I’m a plotting pantser —  at times, “plodding pantser” might be more accurate — though I started as a true-blue pantser.

It was only after finishing one manuscript and starting another that I realized my stories were lacking something. My characters were fun, and they spoke in clever dialogue, but the books didn’t move!

I turned to Mary Buckham and Dianna Love’s Break Into Fiction for help. 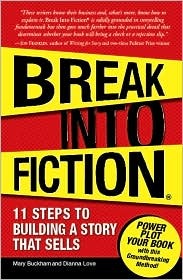 You see the little circle on the bottom of the cover that says “Power plot your book”? Well, after reading Love and Buckham’s advice, I understood my plot problem.

I didn’t have one.
Kind of an issue if I ever wanted to actually sell a book.
Which I did (and do).

Clearly, pantsing wasn’t working for me.

This should have come as no surprise because — much as I hate to admit it — spontaneity isn’t my strong point.

I’m an organizer — okay, a control freak — by nature.

My to-do list is updated and re-prioritized on a regular, often daily, basis.

And that annoying person who knows every detail about the family vacation destination — that’s me.

If we’re planning a party, I have a chore and cooking timetable laid out two weeks ahead. (My husband’s in charge of the beer, which generally involves a lot of “tasting” at Great Lakes [http://tinyurl.com/c249cc3] Yeah, it’s an unfair world :-)).

I don’t even drive to Columbus — an hour and a half away — without both a Mapquest printout and my GPS. So what the hell was I thinking, attempting to write a book without some sort of outline?

I needed a plan! Or a plot, which in this case was sort of the same thing.

Fortunately, a writer can learn how to plot, and I’ve since attended several good workshops and workshop sessions on the topic. After hearing my friend Donna MacMeans (http://www.donnamacmeans.com/) explain plotting with what she calls the “W plot,” I began to understand the concept.  (Here’s a link to Kathleen Wall’s excellent blog posting on Donna’s presentation: http://tinyurl.com/6q296bq).

More recently, I heard Alexandra Sokoloff speak about using screenwriting techniques to craft a good novel. (She’s also written a book on the subject, available on her website [http://alexandrasokoloff.com/]).

I like Sokoloff’s approach because it includes making lists(!) of favorite movies and books, and breaking them down by plot element. By understanding these components, I can learn to include them in my own writing.

I already know that starting a book without at least a basic outline of the story doesn’t work for me.  I need a good idea of where the story is going, how I’ll keep the problematic middle from sagging and at least some concept of the ending.

The rest I can make up as I go along, allowing allows characters to take on a life of their own and new ones to pop up as they always do, seemingly from nowhere.

By progressing in this manner, I hope to use the best of both plotting and pantsing techniques.

At least that’s the plan. <Grin>

Now, tell me about you.

8 Responses to Pantser or Plotter?