Time to Spare, Go by Air

Travelling in a small plane is sometimes an adventure, mainly because weather plays such a large role in both timing of a trip and whether you can fly at all.

Last weekend, we planned to fly to Montgomery, New York and back on Saturday. Unfortunately, a storm front was dithering its way in from the west.

Would we be able to fly? If so, when? The Engineer checked radar and weather repeatedly throughout the week, finally making the call Friday afternoon.

I arrived home from a bike ride to find him packed, ready to leave to pre-flight the plane while I showered and packed.

Within an hour we were eastbound. Within two, the rolling forests of Pennsylvania spread before us like a rumpled carpet. 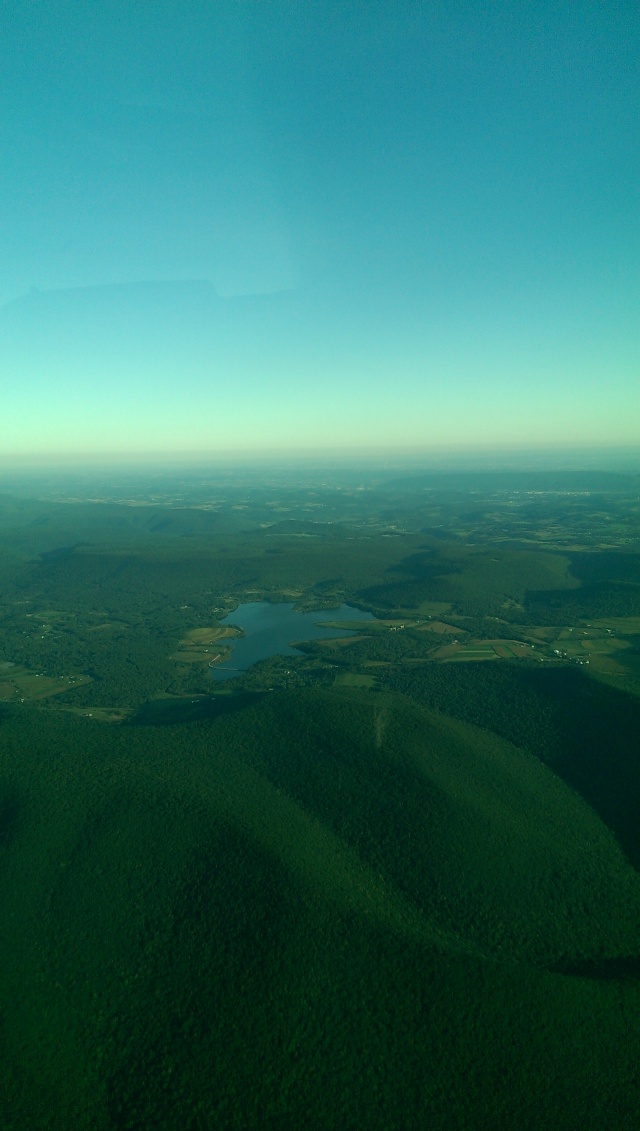 This might be a good place to explain why we were flying to Montgomery, a place neither of us had ever been or heard of before planning this trip.

You see, though we bought our plane from a dealer in New Jersey, it was previously  based in Maine, where a guy named Bob happened to see it. Bob, a model plane builder, wanted to build a Cessna 182, so he snapped a few photos. When he began working on his plane few years later, he looked up our plane’s tail number on the FAA website and sent The Engineer a letter asking whether we’d mind our tail number and paint scheme on being used on the model.

We were happy to agree, enjoying the idea of a little version of our plane flying around New England, and Bob kept in touch, sending occasional updates on his progress.

Fast forward to earlier this year when Bob wrote to say he was getting out of the model hobby. Did we want to buy the little Cessna, a plane we already affectionately referred to as “Mini-me”?

We decided to meet in Montgomery, a three-hour flight for us and a three-hour drive from Bob’s home in Connecticut.

With our usual impeccable timing, we managed to arrive the night before “General Montgomery Day,” an affair that appeared to be the Montgomery event of the year. Within five minutes of landing, the airport manager warned us the parade was staged from the airport, and the roads would be blocked off until noon.

Not a problem. Bob and his wife were meeting us at noon, so that would work just fine.

The same manager helped us snag the last hotel room at the Holiday Inn, a hotel that, as it turns out, did not have a shuttle as he previously believed.

What the hotel did have was an extremely kind receptionist who came to pick us up in her car, though she made a point of telling us there was a taxi service we should use in the morning.

She also told us about the parade as she drove us what seemed to be the long way round to a hotel that was supposed to be just two miles away.

The clerk behind the desk told us about the parade too. So did the taxi driver the next morning as he drove us an equally meandering route back to the airport.

I assumed this was because of the parade and braced myself for an exorbitant fare at the end of the ride, especially after we were turned back by the police and forced to take a detour because of — you guessed it — the parade.

No matter. We pulled in behind Bob and his wife Sherilyn and told the bill was only ten dollars, less than Cleveland taxis charge for a ten minute drive from Hopkins.

Bob and Sherilyn and The Engineer and I dined at Culinary Creations. If you’re ever in Montgomery, New York, I suggest you do the same. The place is amazing. (Check out their website, and you’ll see what I mean. It’s a far cry from the usual airport restaurant fare.)

The weather, however,  was not amazing. This resulted in somewhat abbreviated rides for Bob and Sherilyn and a damp photo shoot for Mini-me.

It was obvious we wouldn’t be flying home that night. Once again, we found one of the last hotel rooms left in the area, this time in an Econolodge. Afraid of being left with no place to stay, I read the top review and booked the room.

Then I read the rest of the comments, which proved much less favorable.

As visions of bedbugs and roaches danced in my brain, The Engineer and I loaded our bags into Sherilyn and Bob’s car for the ride to that night’s lodging. After a thirty minute drive to a place six miles away, we were feeling extremely grateful for the lift, and it was finally beginning to dawn on me that this part of New York was like Pittsburgh. The distance to where you’re going doesn’t matter near as much the number of mountains between you and your destination.

There were no bedbugs at the motel. No roaches either, at least none I saw. The furnishings were clean, if worn — the word “shabby” comes to mind — and we had a king-size bed, a great advantage when your husband is 6’3″.

We ate dinner at Cilantro, an elegant tapas bar not far from our inn. It looked out of place on a main road surrounded by not very much of anything else. I’m not normally a fan of sangria but we drank two carafes with our (delicious!) dinner and then stumbled, I mean walked, back to the Econolodge.

By morning, the weather was clearing. The ride home was a bumpy one, flown mostly above the clouds, but it was still pretty.

Weather affected our trip the previous weekend as well. On the way to Illinois, we had to swing south, almost to Columbus to avoid the weather that was hanging over northwest Ohio and moving slowly east.

This is probably western Ohio or Indiana. Illinois is mostly corn and bean fields, a mix of green and gold with fewer trees, more like quilt than a carpet. I know the simile is cliché, but it’s apt.

There are lots of wind turbines, miles of them planted among the other crops. I like this picture in black and white, the way the gray tones play up the whiteness of the turbines. 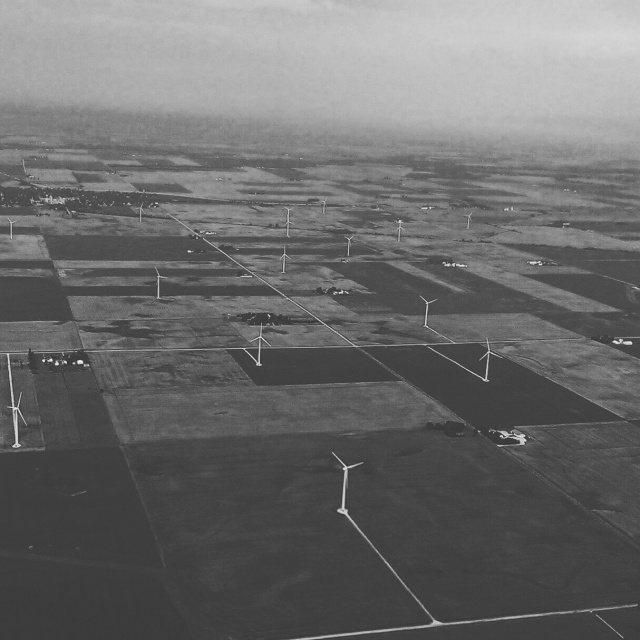 It’s incredible to see the country from a small plane, but you have to be willing to go where the wind, or weather, takes you.

2 Responses to Time to Spare, Go by Air