The Engineer and I were recently in England, a place I have been lucky to visit many times with my expatriate hubby.

The first time I went, we were strolling around Leamington Spa when I spotted a woman working outside.

“Look!” I said.  “She’s hanging out laundry behind that house!”

From The Engineer’s indulgent smile, I  got the feeling he was humoring me.

With its dark  crooked timbers — cut before mechanical tools made an appearance — the building would have been a national treasure back in the States. In the U.K., it was a family home, complete with underpants and socks fluttering in the breeze.

I quickly learned that for something to be considered truly historic in England, it had to be what we Yanks would consider ancient. Like, I don’t know, maybe eight or nine-hundred years old.

My husband hails from around Coventry, a city nearly obliterated by the Germans in World War II. Unsurprisingly, there are few historical buildings in the city and surrounding areas. (In fact, the word “coventrate,” meaning total annihilation, was coined to describe the aftermath of the bombings http://www.urbandictionary.com/define.php?term=Coventrate).

The pub in The Engineer’s village is also elderly — a  girl told me parts of it were from the seventeenth century — but St. Leonard’s, the church, is old.  Built in 1080, it stands on woodland given to the Coventry Priory in 1043 by Lord Leofric, husband of Lady Godiva (http://www.ryton-on-dunsmore.org.uk/church/ for more details).

In England, history is everywhere. You cannot walk far without sensing you walk where countless others have trod.

York as Seen From City Walls

We visited York, including its Minster, a building begun in 1220 and finished 250 years later. The current Minster is the actually the third one, the previous two having been built in 1069 and 1080, respectively. And York goes back even further. The city was founded in 71 A.D. by the Romans, who called it Eboracum, and remained a military and commercial hub until the early 5th century.  (http://tinyurl.com/osz6bbx for more on that part of the story.) In fact, the Minster is built on the ruins of some of the barracks.

Leaving York, we took a circuitous route to Hathersage, passing Castle Howard — ancestral seat of both Anne Boleyn and her first cousin Catherine, who share the dubious honor of being the only two wives executed by Henry VIII. (In the four years between the cousins’ marriages, Henry found time to wed two of his other wives, Jane Seymour and Anne of Cleves. He was a busy man, Henry Tudor.
(http://englishhistory.net/tudor/monarchs/fiveanne.html.)

Castle Howard was clearly a tourist destination, complete with car park and tea room. In contrast, the ruins at Sheriff Hutton were just that. Clearly visible from the road, they served as a haunting reminder that something great once stood there.

I later discovered the ruins were the remains of a castle with close connections to the powerful Neville and Warwick families, and eventually home of Henry Fitzroy, illegitimate son of Henry VIII. 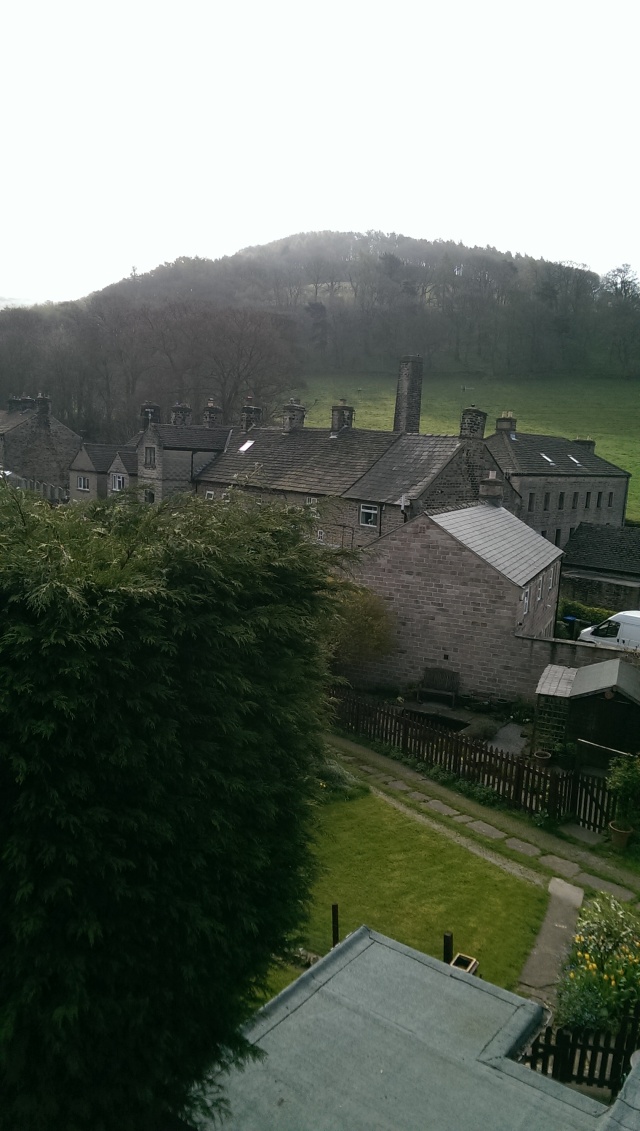 Hathersage is in the Peak District (second most visited national park in the world). Once known for its production of needles and pins made from nearby Sheffield’s steel, the village is now a popular stopping place for the many rambler and cycle tourists visiting the area.

Former inhabitants of our friend’s home worked as cutters, snipping the metal into its final product. When Liz and her husband replaced their kitchen floor, they found thousands of needles.

History beneath their feet.

In the modern Birmingham Library,  the past lives above rather than below. Its top floor houses the Shakespeare Memorial Room. Before the demolition of the Central Library in the seventies, the room, originally built in the 1880s, was dismantled, and eventually found a home in the current library building (opened in 2013).

My husband’s aunt live in “elegant redbrick Victorian farmhouse set in the open Warwickshire countryside overlooking fields.” (I know this because their website says so. http://www.windmillhillfarmhouse.co.uk/) It’s a B&B, and when we dropped by to visit, they mentioned that some archeologists want to dig up the basement. It seems there’s been a house on that land since Saxon times.

Another aunt runs a different B&B, called the Mill House. Previously — like in the 13th century — it was known as Quineton Mill.
(http://www.millhouseoffchurch.co.uk/contact/contact.htm)

History, you know — it’s beneath our feet.

I mention these not to promote their businesses — though they are both lovely people should you ever care to stay with them — but to illustrate how frequently the present is built on the past.

As I mulled over our experiences, it dawned on me that our lives are also built on the foundations of others. Our parents and grandparents and great-grandparents’ lives — even if they ended in ruins — lay beneath what we have become.

My father’s earliest years were spent poor in West Virginia. I’m not sure his parents ever owned a house, even after they moved to Ohio. But his mother was a former teacher, and he — though not his sister — was expected to go to college.

I was the middle child of three, wedged between a sister who should have been a brother and a red-headed brother who was definitely the spotlight-hogging baby of the family. It was understood that we would all graduate college, though I was the only one to do so immediately after high school.

It would be great to take credit for this achievement, but the reality is I was probably trying to get attention by doing what I was told. We “middlers” have a tendency to do that because we often grow up feeling ignored.  We also sometimes measure how much we are loved by the amount of attention we get, or even — and I’m ashamed to admit this — the amount of money someone spends on us.

Jealous much? Nope, not me. At least not since I realized that any advantages I thought my siblings had over me didn’t make them any happier.

Still, emotions aren’t logical, and even in my fifties, there are times I revert to my childish, envious self. To this day, I can’t stand to feel ignored.

Emily Dickinson once said, “The past is not a package one can lay away,” and she was right. It’s always there, stowed away deep inside.

This “past as foundation” idea also applies to the characters we create. We should remember that each needs a history which — good or bad — helps explain who they are. Offering glimpses of this history can generate that “Aha!” in a reader when they suddenly understand the hero hates dogs because he spent every spring picking up poop in the back yard. Or the heroine can’t stand to be told what to do because she had a bossy big — or, even worse, little — sister.

Think about it. Be honest, if only with yourself, and I think you’ll find that your past, and the past of your parents and their parents, laid the groundwork for the person you became.

Why would your characters be any different?

6 Responses to Ancient History or Foundation?